Q&A website Quora hacked; 20.7% Indian Users are on the platform

Q&A websiteQuora has announced an incident of massive data breach exposing close to 100 million users of their personal data and other activities on the platform. The company has claimed to trace the issue, and necessary steps have been taken to counter the situation.

Quora CEO, Adam D’Angelo stated in a blog post about the incident that traced on Friday about unauthorized access to their system part by a malicious third party. Their team is investigating the data breach further to enforce required steps to avert such situation in the future.

Quora team is working to alarm the affected users, whose personal data including names, email and encrypted passwords had been breached as well as their questions, answers and comments. The platform is logging out users, and these users must reset their passwords. 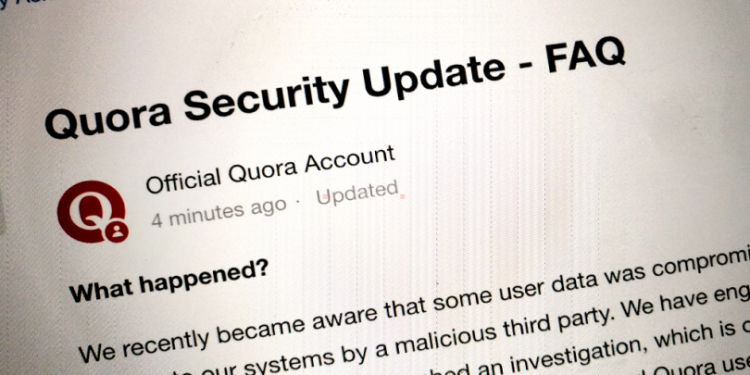 Quora has decent users and traffic from India that is close to 20.7 percent using them to ask questions and talk about topics of common interests. Users can post a query on any subject and get responses from individuals acquainted with the particular subject.

The Business entered the unicorn club using an evaluation of $1.8 Billion following a Series D round of financing led by Collaborative Fund and Y Combinator’s Continuity Fund. Citing the Indian users’ influx company has launched the platform in the Hindi language as well in June.

At the moment, the number of Indians who’ve been influenced by this violation isn’t known. We will keep you updated of any advancement in this news.